The Binge Eating Recovery Coach
1. Top 2 Addictive Foods That Cause Binge Eating
Written by Amy Morton on May 27th 2020 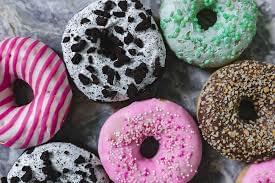 1. Sugar
The #1 most addictive "food" is sugar. Sugar is known to be one of the most addicting substances ever discovered. Originally in the 1100’s, sugar was brought to Europe from the East and was declared a pharmaceutical that was to be kept confiscated by the apothecaries and was worth more than its weight in silver. It treated heart problems, blindness and was considered an antiseptic and a preservative. After 1400, sugar became a street drug and in the 1900's sugar was extracted from sugar beets and sugar cane and lead to an astounding consumption of 6 lbs/year in 1950 to 160 lbs/year in 1999; a massive increase for the American people.


There are two kinds of addictive sugar: Sucrose and Fructose. Both with abilities to set off all 5 pleasure centers in the brain at once, making them absolutely irresistible with no amount of willpower to stand a chance.
Sucrose is made from processing sugar cane and is 800x sweeter than nature ever intended. After scientists discovered how to make this sugar cheaper, sweeter and more addictive, they launched a “new” sugar: High Fructose Corn Syrup (HFCS); producing some of the most popular and addicting beverages ever made. HFCS turns off alarm signal systems in the body essential for communicating fullness and satiation, making us physically incapable of saying no and increasing disturbances in metabolism, weight gain and overall health. HFCS is linked to diabetes, heart disease, fatty liver disease and is present in 70% of diabetics. If you’re thinking to yourself, well maybe ill just drink diet sodas instead to avoid these sugars, think again. Diet sugars can be just as addictive and can also cause cravings, raise blood and insulin levels and increase the risk of both weight gain and type 2 diabetes. The International Diabetes Federation concluded that sugar kills 1 person every 6 seconds and is strongly implicated with heart disease, cancer and diabetes. Other studies show that consuming 2 HFCS sodas a day for 2 weeks triples the risk of death by heart attack and increases the risk of blood sugar regulation issues by 17% and just by consuming 1 soda a day can increase liver fat by 150%.
2. Wheat Flour
The second most addictive food ever known is Wheat. Wheat definitely does have its benefits such as a higher protein content than other grains and is a high calorie food etc, however, it also contains over 100 proteins that have absolutely no biological value. The addictive and irritating substance in wheat is its gluten. Gluten causes a blocking of mineral absorption due to its phytates and can be neutralized by a special fermentation process, however, this process is rarely seen in the west. Have you ever heard anyone say that they can’t live without bread? This food has become highly addictive due to the wheat's most nutritious ingredients- bran and germ, being removed in order to make the bread rise higher. The downside of this delicious bread? What’s left after the removal of these beneficial components is a pure white powdered carb which immediately fires all of your brains reward pleasure centers the moment you take a bite. Gliadin, a protein in wheat, works together with the gluten to give the bread its puffy texture, irresistible taste and addictive cravings that also fire all your brains reward pleasure centers at once, giving you an irresistibly intense euphoric feeling. This is one of the big reasons we are consuming 35 more pounds of wheat flour products a year than we did 50 years ago.
These are the top two most addictive foods ever known that make saying 'no' to more food, pretty close to impossible. However, it isn't all doom and gloom. There is a way out. There is a way to still be able to eat these foods, if necessary, and have total control. By identifying and balancing your biochemistry, this all becomes possible.


Amy Morton helps people overcome food addiction and binge eating for good. She is an expert at helping women rid this debilitating condition by addressing the root cause, something that's neglected in conventional approaches.

If you're interested in finally overcoming this issue forever, having a healthy relationship with both food and yourself for the first time in a long time, then definitely reach out and request a free strategy session today.